It’s been a busy and productive week for team S-Corp!  First, we had two S-Corp representatives testifying before congressional committees on Wednesday. Second, with the Finance Committee working group comments due on April 15th, we made three separate submissions to the Business, Individual, and International working groups. And finally, as part of the working group submissions, we released the 2015 version of our “Pass Through” tax reform principles letter with 118 trade groups signing on!

Here’s a quick summary of each of these efforts.

In an S-Corp first, we had two witnesses testifying at congressional hearings on Tax Day.

Board Member Dan McGregor testified before the House Small Business Committee Wednesday morning in a hearing entitled “Tax Reform: Ensuring that Main Street Isn’t Left Behind.”  Dan is chairman of the McGregor Metal Working companies based in Springfield, Ohio.  They engage in metal forming for the auto, agriculture, and locomotive industries and employ about 375 people.

Before the fiscal cliff (2012), McGregor’s effective tax rate was 34 percent. You should watch Dan’s testimony to get the full story on how important the S corporation structure is to family businesses like his, but if you don’t have time, here’s the headline:

There may be a policy other than lower rates that would reduce Dan’s effective rate from 47 percent to something in line with what C corporations would pay under a 25 percent corporate rate, but we don’t know what it is and after years of trying, the policymakers pushing corporate only reform have failed to produce it.  If you’re wondering what the pass through community’s angst over corporate only reform is, it’s illustrated above in three easy-to-understand numbers.

Next up for S-Corp was Brian Reardon, who testified before the Joint Economic Committee that afternoon in a hearing labeled “Small Business, Big Taxes: Are Taxes Holding Back Small Business Growth?” 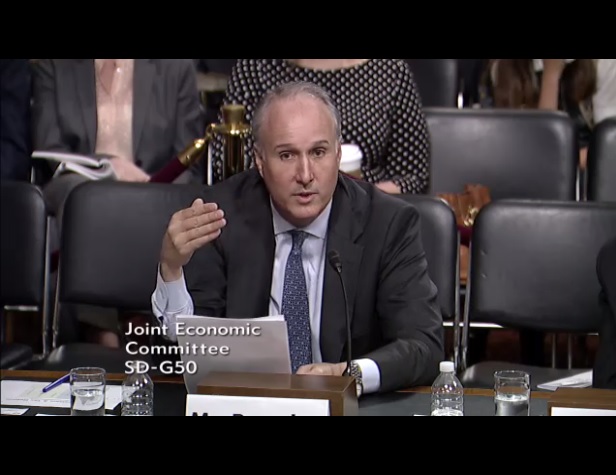 You can watch Brian’s entire testimony here.  His written testimony focused on the key advocacy messages we’ve been using over the past four years to ensure that S corporations are a full partner in any tax reform considered by Congress, including the “Pass Through Principles” endorsed by 118 business trade groups just last week (see below).

Earlier this year, Finance Chairman Hatch announced he would form five working groups to explore the various aspects of tax reform, with a goal of these committees reporting back to the full committee by the end of May.  Stakeholders were asked to provide their views by Tax Day – April 15th.  In the end, we submitted comments to three different working groups.

Business:  The business working group has been tasked with recommending reforms that would make US businesses more competitive.  In our comments, we emphasize five key points

International:  The Hatch working groups, like the Camp and Baucus groups that preceded them, are an opportunity for S-Corp to educate policymakers on something that rarely gets significant attention – the presence and challenges of all those S corporations with significant overseas operations. The key message here is that, unlike C corporations, S corporations really don’t have the ability to defer paying US taxes on their foreign-sourced income.  As with their domestic income, they pay the full tax when it is earned.  For that reason, most S corp activity overseas is conducted under a branch structure, rather than as a controlled foreign corporation.  It also means that any move towards territorial for C corporations needs to leave S corporations unharmed (i.e. not paying for the new territorial system since they won’t benefit).

Four years ago, we made policymakers aware that the pass through business community opposed “corporate only” tax reform.  As our EY study made clear, corporate only meant a massive tax hike on Main Street businesses.

As part of our advocacy efforts, we went a step further and attempted to articulate what pass through businesses would support in tax reform – the three Pass Through Principles.  Last week, in conjunction with our testimony and Working Group submissions, we released the 2015 update of the Pass Through Principles letter with 118 trade groups signed on, including the American Farm Bureau Federation, National Federation of Independent Business, American Council of Engineering Companies, National Beer Wholesalers Association, American Trucking Associations, Associated General Contractors, and the National Roofing Contractors Association.

This is the third iteration of these principles.  In 2011, 45 groups signed on to them while in 2013 we had 72 signatories, so momentum is building for tax reform that treats Main Street Businesses as equal partners.  As we’ve said many times, it’s all about the rates.